Like many other fans of manga, I read many manga series online as well as buying the books themselves when they are (finally) released officially in America. Oftentimes the “official” translation and the “scanlation” differ greatly, resulting in a great difference of quality and accuracy in translation and image overall and are hilarious. 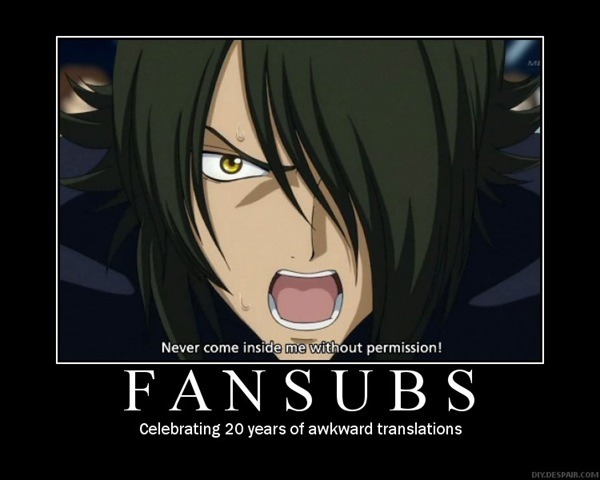 Many blogs have discussed the legal relationship that exists between the official release and the fan scanlation, but the history of the two are intertwined. Before manga became the popular medium it is in America today, it had a long process before getting released officially.

After some snooping around I found out that it all started with a group called Dadakai, which was headed by Frederik L. Schodt. Schodt had spent some time growing up in Japan, and did some time as an interpreter, forming an attachment to the Japanese manga. When he went to school to further study interpreting Japanese, he formed the group with Jared Cook, Shinji Sakamoto and Midori Ueda with the dream of bringing the Japanese art of manga to the US. Of course, at this time the American audience had little to no Japanese saturation at the time. The group was a sort of scantalation team themselves, as when they started translating the manga “Phoenix” by Osamu Tezuka they were shot down (this was in the 1970’s-80’s) but the translation was eventually used by Viz Media when they published the series in 2002. To put it in the words of Schodt “it was way too early” to bring the translations over to an American market, “people weren’t even eating sushi yet”. The group eventually disbanded, but Schodt and Cook continued in the field of translation in works like Astro Boy.

Even though early efforts to bring manga over to the states didn’t succeed, other scanlation groups made it possible with the use of the internet. Those who did the scans were able to find other who could translate, and also with the internet they didn’t have to rely on publishing companies to make others aware of this new art form. This resulted in the creation of the IRC channel named mangascans in the late 1990’s. From this scanlation groups formed and truly brought manga to the US. Interestingly enough, back when companies would officially release mangas, most of the scanlation groups would take down their scanlations. This is something that causes many problems today as many popular series are found online, including chapters that are already officially released.

Of course, scanlation groups did serve a very useful purpose in the beginning of introducing manga to an American market. When Shounen Jump was first published, Viz Media had several scanlation groups support the magazine and the groups were even paid a portion of the revenue made by Shounen Jump. Even though scanlation groups seem to be in a bit of a gray area in today’s manga society, they served and continue to serve a useful source for an American audience. Even today the American audience only receives a very small portion of what manga is in Japan, as publishers will only bring over what they believe will sell (namely, they will only translate mangas that are similar to other popular mangas). Not only do scanalation groups bring over mangas that may never be made available otherwise, but they also bring more options of “comics” overall to a female audience. While there were “romance” comics released, none of them seemed to be a well-developed comic, even compared to other comics of the day. Even today there are not too many comics geared towards the female populace. The genre of shojo brought over the idea of females reading comics, which was formally a “boys thing”. While the introduction of shojo manga is not solely due to the work of scanlation groups, they were responsible for showing the publishing companies just how popular certain genres or single mangas could be.

In stores we have a somewhat varied selection of manga, and this is primarily due to the work of scanlation groups. Publishing groups owe a large amount of their success in publishing manga to the groups, despite their rocky relationship in society today.