Connection of Style and Story

From artist to artist, there have always been stylistic differences in art and literature. Of course different artists have different abilities and styles, but how they use a particular style becomes prevalent in regards to the story they tell. The medium of Graphic Novels is an example of this, as artists/writers not only control the actions of a story through speech, but through facial expressions and body mannerisms as well. Different artists focus on different aspects of a comic. Take Cyanide and Happiness for example, from the artists Rob DenBleyker, Kris Wilson, Dave McElfatrick and Matt Melvin. Jason Nemeth wrote about the web comic in his blog describing the characters as rather similar but with differing colors or accessories to tell them apart. This could be seen as lazy in some ways, but instead of focusing on the characters themselves (as there are hardly any reoccurring characters) the writers focus on the situations of the characters, which is usually explained by the first panel. The characters can be anything with their simple designs, and as such the writers put the characters through multiple situations. This style lends itself to the plot, making a popular franchise out of a simple stick figure.

Manga always seems to be in a genre of its own with its universal big, beautiful, anime eyes and disproportionate bodies. This almost seems to be a culture choice, but how the author chooses to use the character design they create along with the expressive eyes affects the work as a whole. One good example of this is Skip Beat! by Yoshiki Nakamura. Nakamura has an odd trait with the characters she draws as being rather long limbed and bigger than what would be considered a normal, typical manga character. Skip Beat! works with the exaggerated limbs, as many of the scenes are meant to be expressive. The series is based around many characters who are actors, and many of the scenes rely on the readers to interpret and understand certain postures or body movements that would not be as easily recognizable in a smaller figure. Of course, the manga also has the typical big anime eyes, but another love of the author is the amount of detail that she puts into the outfits of her characters, which again plays into the characters being part of show biz.

Going in the completely opposite direction from the beautiful figures of Skip Beat!, Manly Guys Doing Manly Things by Kelly Turnbull employs different methods for its characterization. With the use of thicker lines and dramatic shadowing, characters are given a more typical “manly” look. Of course, not all of the characters are men, as even some of the manliest super warriors are women, yet they are also given the manly muscles. Even with the characters who are normal are emphasized with the thick lines and shading, as they are a sharp contrast of the muscular guys which headline the comic. 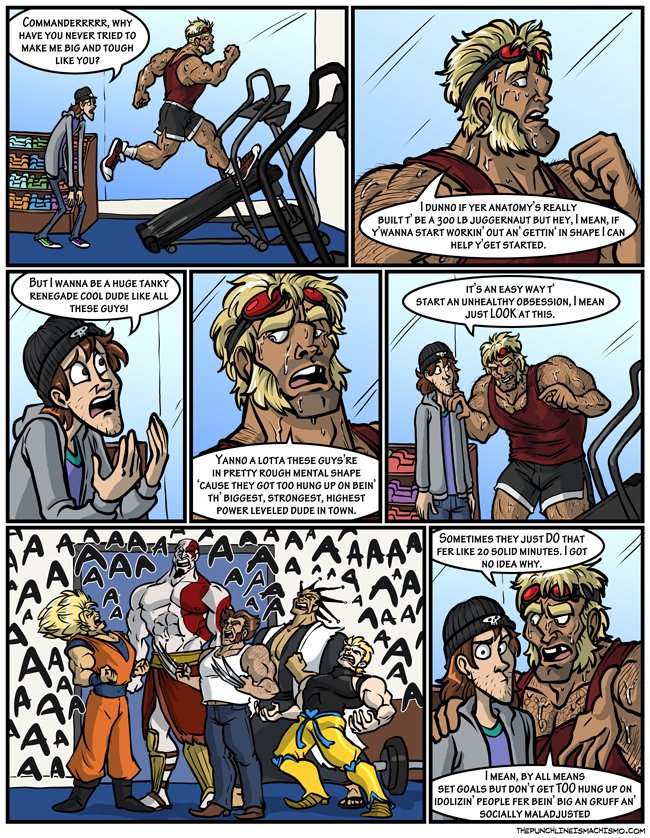 Each artist has their own style, and how they use that style makes each graphic novel unique. The art affects the story just as much as the story affects the art, and I find that there are connections between style and story everywhere.

← The Trouble with Omnipotent Characters
Disorder Caused By Order: I Read the Book and Now the Movie Sucks! →