by jordanriser on September 13, 2015 in Article

In recent discussions throughout class we have talked about all the elements of a graphic novel including color, animation, characters, and text. While doing some further research into the aspects of graphic novels I came across an academic paper about the fourth dimension that pulled me and I wanted to expand on this idea. One of the most important concepts of the graphic novel is the reader itself. The reader decides how the comic or graphic novel is analyzed overall and the interpretations can be endless for a single comic. In this academic paper, Alan Moore and the Graphic Novel: Confronting the Fourth Dimension, it discusses the concepts of the fourth dimension, time, and space.

Writers, Mark Bernard and James Bucky Carter, describe the fourth dimension as, “a special relationship with space and time wherein the two conflict such that infinite multiple dimensions become simultaneously present. When the reader’s interaction, his or her own space-time, is accounted for, this evocation of space-time becomes quite literal and expands exponentially.” (Bernard and Carter).  We have seen this fourth dimension in some of the comics we have looked at in class. For example, 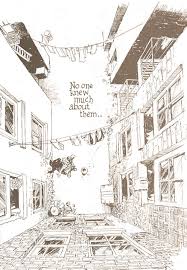 This individual image from A Contract With God was the first one that came to mind while reading about the fourth dimension. This is not just a flat image, it has depth, lines that seem never ending, multiple dimensions, and most of all feel like you are actually in the image which not only makes you a reader but actually involves the reader in the picture. Although this picture is just another image on a flat page, it becomes alive with the reader.

Although the reader is reading the text within the novel the drawings are making the past present. This image shows reality, it shows everyday human struggle. A reader may have not gone through the same struggles as the main character in the novel, but this picture represents something that every reader could relate too. The image sparks emotions and feelings of sadness, stress, wetness from the rain. Looking at this picture its like you can actually feel the rain soaking your back, hair, and clothes. The dimensions of the image is what creates this feeling. The lines of the building do not just stop at the end of the page, they continue to fade off the page making it so surreal.

From reading this paper about the space-time and fourth dimension, I became more appreciative and pay more attention to the details of images. I guess before I didn’t really pay so close attention to details of the lines as much as I should. With this knowledge of the fourth dimension it enhances the graphic novel and takes it to another level. With the age of technology that we live in and will continue to advance the experience of the reader will only increase. It is crazy to think that we could ever get to a level of technology and talent that makes the reader apart of the image.

← A Contract With Relgion
Rosie’s Demonization →