Franklin Harris wrote an article focusing on Watchmen and other politically centered comics, or graphic novels, as he credited Watchmen as being the very first reason for the category of graphic novels. The biggest difference between the main superhero characters in Watchmen  verses those in Batman and Iron-man  is that they are protagonists that solve all of the worlds problems instead of Moore’s characters who lack the immortal type of personalities. I think this is a really interesting point because it makes Watchmen  more realistic, although none of the above comics are truly realistic. It is easier to believe the main hero’s have flaws and are not incapable of making mistakes or having a somewhat dark side.

I personally think they are a positive addition to a police force. Harris notes that the lesser of two evils is still evil and I agree with that however I don’t see any of the superheroes in Batman and Iron man being truly evil. They have battles within themselves over whether a fight is worth it but I seem to think that they always make the right choice. I am aware this is often because a movie strives to end happily but I like to believe in my world that it would be like that in real life too as naive as that may be.

If an author were to write a superhero that did not have positive motives and made poor choices all of the time, we would never have looked at them as a superhero to begin with, and they would have been the villain. Watchmen has main characters that are different from the batman’s and superman’s we are used to and they are more realistic people. They in fact make the world a worse place which is an interesting contrast.  They deal with the real world more and therefor may seem more evil.

The setting of a graphic novel also plays a large role in how the characters are portrayed. If a superhero walks into a somewhat peaceful city they are obviously going to come across as amazing and perfect, if one comes into a dangerous and nasty city either they turn it around and also are amazing and perfect, or they fail to make a significant change and are either bad superheros or become the villain. 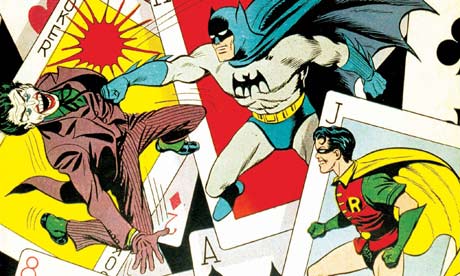 ← Understanding Stories
Achewood is a celebration of the English language. →