The Pen is Mightier than the Sword: Syrian Cartoonist’s Fight against al-Assad

Art can be a very effective means of expressing personal beliefs and ideologies, and sometimes that art tells a very interesting story. Political cartoons, in a way, are a perfect example of a story told over a long periods of time. In a sense, political cartoons are generally aspect-to-aspect graphic novels of current events. When we dip into the archive of political cartoons, it can act an illustrated version of a history book. However, art is subject to interpretation and bias. Political cartoons are told from the perspective of an individual, and while that perspective is often shared by the masses, there will always be someone who disagrees with an artist’s statement. Sure, any critic can be harsh and potentially degrading to one’s self-confidence, but at least their words are  only in print: black and white, with no physical impact on the artist. This was not the case for the beloved Syrian cartoonist Ali Farzart who was kidnapped, physically assaulted, and dumped on the streets of Damascus. For years Farzart has been know for publishing political cartoons that spark controversy. His art exposes the hypocrisy and corruption within the government and wealthy elite. 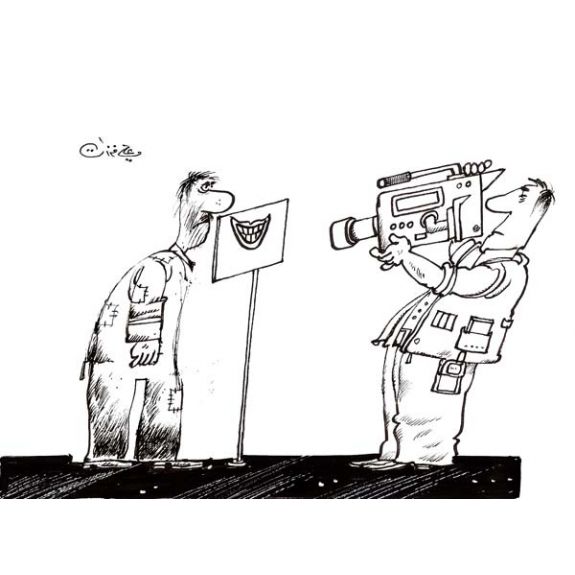 Farzat is no stranger to violence either. In 1989, after showcasing his art at the Institut du Monde Arabe in France, Farzat received death threats from m Hussein. This has never stopped Farzat before, so as Bashar al-Assad’s grew so did Farzat’s artwork, and he aimed his pen right for the president. While Farzat created many political cartoons that commented on al-Assad himself, or his politics, one cartoon in particular lead to the violent outlast towards Farzat. This cartoon of al-Assad hitching a ride with Col. Muammar el-Qaddafi of Libya lead to extremist kidnapping Farzat on August 25, 2011.

It was reported that the men suspected were part of a pro-regime militia, and the injuries Farzat received were focused on his hands. His beaten body was dumped on a  street near the airport and bystander found his and took his to the hospital. The extent of the damage can be seen in this image.  Farzat claims the violence was only suppose to serve as a warning, but it proved his artwork had been considered significant enough to caused a stir. Farzat stated, “Every day the revolution inches a step forward. I am very optimistic. Do you see anyone turning back?”

Turning back is the last thing Farzat wishes to do. In fact, his assault did not go unnoticed. Time magazine awarded Ali Farzat as one of the 100 Most Influential People. He has gone back to cartooning and spreading his beliefs for the Middle East. Farzat was so unscathed by the attacks against him he released a cartoon he helped co-create with other artists. Here is his response to his kidnappers:

← Race in the Watchmen
Why so Sad Charlie Brown? →

3 comments for “The Pen is Mightier than the Sword: Syrian Cartoonist’s Fight against al-Assad”